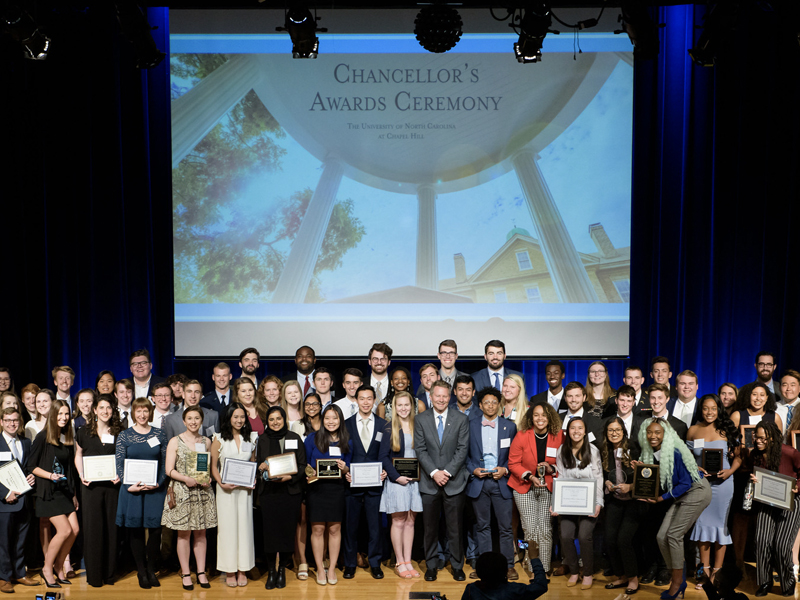 On April 16, 2019 UNC honored its most outstanding students for their academic achievements and exceptional leadership on-campus and in the community. Among the Chancellor’s Awards winners were ten Campus Y Executive Board members, committee co-chairs, and program participants. Please join us in recognizing these exceptional students:

Eduardo Fernandez served as Project Heel Co-Chair from 2016-2017 and Campus Y Co-Director of Development from 2017-2018. Fernandez received the Algernon Sydney Sullivan Award. This award is bestowed annually upon one man and woman of the senior class who have best demonstrated unselfish interest in human welfare, with an emphasis on humanitarian contributions.

Jessica Bolin served as AGRADU Co-Chair from 2016-2017, Campus Y Director of Evaluations from 2017-2018, and Campus Y Co-President from 2018-2019. Bolin received the Class of 1938 Joseph F. Patterson, Jr. and Alice M. Patterson International Leadership Award. This award is presented to the undergraduate who has made the most significant contribution to increasing international awareness and understanding.

Mistyre Bonds served as Campus Y Co-Director of Outreach from 2017-2018. Bonds received the Cornelius O. Cathey Award. This award is given annually to the student who has made the greatest contribution to the quality of campus life through sustained, constructive participation in established student programs, or through creative, persistent effort in development of new student programs.

Courtney Staton served as CJAA Co-Chair from 2016-2017 and Campus Y Co-President from 2017-2018. Staton received the Edward Kidder Graham Award. This award honors the graduating senior who has made the most outstanding contribution to the University through a student organization. The recipient is recognized for his or her leadership, dedication, innovation, and support of the University’s mission.

Allison Whitenack served as CAGE Co-President from 2017-2018 and Campus Y Co-President from 2018-2019. Whitenack received the Jane Craige Gray Memorial Award. Established in 1954, this award is presented annually to the woman of the junior class who has been judged most outstanding in character, scholarship, and leadership.

Ewen Liu served as Co-Chair for Advocates for Carolina from 2016-2019. Liu received the James Johnston Distinguished Senior Award in the Undergraduate Program. This award recognizes the senior student in the Johnston Undergraduate Awards Program who is most deserving of recognition for outstanding academic achievement and for leadership contributions.

Scott Eamons was a CUBE participant from 2016-2017 for his social startup “Empower.” Eamons was awarded the Archibald Henderson Mathematics Medal. This gold medal is presented annually to the undergraduate judged by the Department of Mathematics to have demonstrated both a high degree of mathematical ability and the greatest promise of originality in the field.

Caitlin Young served as an executive member of CJAA from 2017-2019. Young received the L. Richardson Preyer Award for Excellence in Political Science. This award is given to a senior judged by a committee of the faculty to have established the most distinguished record of scholarship in Political Science and in service to the community.

Sierra Dunne served as the Co-Chair of Hope Gardens from 2016-2017. Dunne received the Peter C. Baxter Memorial Prize in American Studies. This award is honors the outstanding senior in the Department of American Studies through his or her intellectual excellence, personal warmth, and contributions to the American Studies Program.

Hampton Smith served as Co-Chair of Art + Life from 2017-2019. Smith received the Undergraduate Prize in Art History. This prize is given annually to the undergraduate who, in the opinion of the faculty committee, has done the most outstanding work in art history.