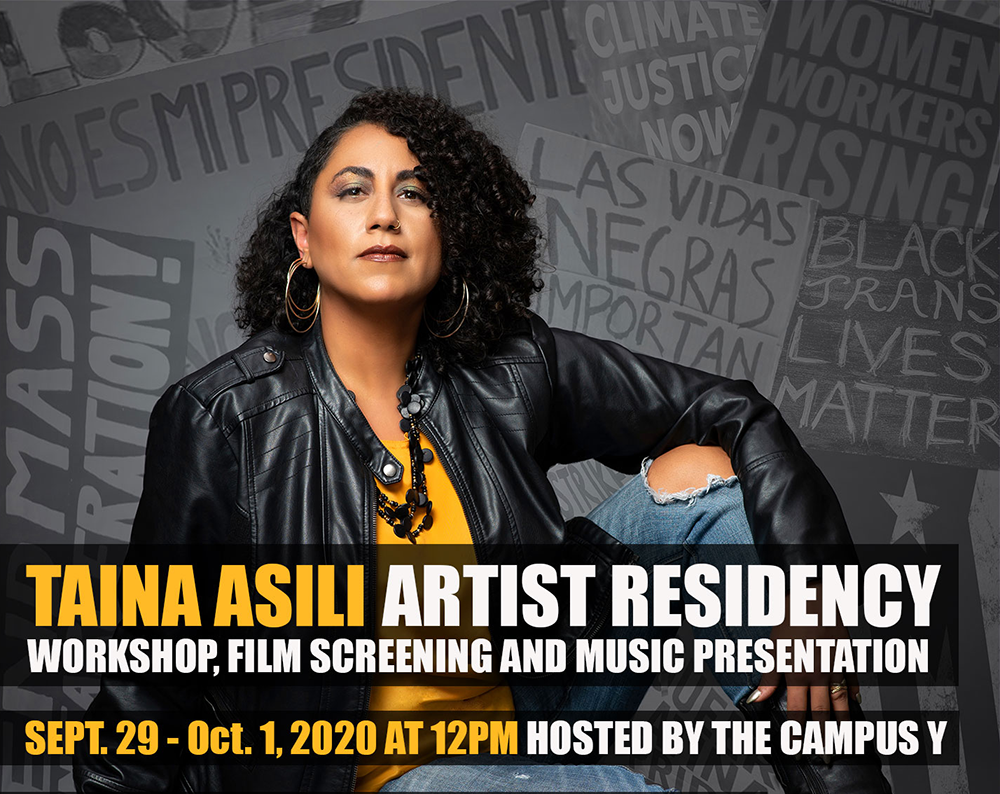 Taína Asili carries on the tradition of her ancestors, fusing past and present struggles into one soulful and defiant voice. Her music combines powerful vocals carrying themes of social justice with an energetic fusion of Afro-Latin, reggae and rock. For over 20 years she has brought the music of love and resistance to venues across the globe – From the Women’s March on Washington to Carnegie Hall to the mainstage of San Francisco Pride. After the 2016 election, a bigger audience has caught up to the artist Huffington Post named one of “12 Freedom Fighting Bands to Get you Through the Trump Years.” Her protest songs “No Es Mi Presidente” and “Freedom,” inspired by social movements against white supremacy, mass incarceration, and police violence, have been lauded by the likes of Rolling Stone and Billboard. The music videos and documentaries Asili has produced and directed have also been selected and awarded and numerous prominent film festivals throughout the nation.

All presentations will be online and are free and open to all. See descriptions and registration links below:

This workshop shares wisdom Taina Asili has gathered from her two decades long history writing songs that seek to reclaim power, break barriers, inspire, and unite. Through slides, videos and songs Taína shares her unique journey as a singer and songwriter for social change. Asili shares how her work as an “artivist” is influenced and informed by the artistic and cultural traditions of her Puerto Rican ancestry, as well as the social justice movements of our past and present. Asili shares her belief that art is our human birthright and one of our most important tools to manifest justice and bring about healing. She then guides participants in a hands-on songwriting exercise, first turning our ideas into lyrics, and later, bringing these words to the music. Join us in this interactive radical music jam to reinvent our world!

As an always expanding artist, Taína Asili’s music career has launched her into the realm of filmmaking in the role of a celebrated director and producer. Her music videos “No Es Mi Presidente,” and “Freedom,” inspired by social justice movements, have been lauded by the likes of Rolling Stone and Billboard. Her music video “We Are Rising” made in collaboration with One Billion Rising was celebrated around the world, receiving over half a million views in its first week of release. Most recently, Asili directed and produced a music video documentary series to accompany her newest album Resiliencia. The first two shorts in the series, “Plant the Seed” and “Resiliencia” won awards and were screened at numerous film festivals across the country. This film screening and conversation will feature four documentary shorts in the series followed by a discussion with participants.

Resiliencia [watch trailer] – Resiliencia follows the journey of NY-born Puerto Rican social justice musician Taína Asili as she travels across the island to have intimate conversations with four women artists and activists about their experiences during and after the hurricanes. The film documents the natural and unnatural devastation to the island and its people, while lifting up the resilience, creativity, and strength of the Puerto Rican nation and the human spirit. Awards: Winner; Best Documentary; International Puerto Rican Heritage Film Festival (NYC) / Official Selection; Global Peace Film Festival (Orlando, FL), Workers Unite Film Festival (NYC).

Plant the Seed [watch trailer] – Plant the Seed is a music video documentary short about black farmer and educator Leah Penniman and her journey to become the co-founder of Soul Fire Farm, a national leader in the food justice movement.

Who I Am [watch trailer] – Who I Am is a music video documentary short about Paola Gonzalez, a trans woman born and raised in Puerto Rico, who finds empowerment in her gender identity as she journeys to Upstate New York and becomes a professional wrestler.

Beauty Manifested – Beauty Manifested is a music video documentary short that shares activist Sophia Smart’s journey to interrupt abusive patterns of fat shaming passed down in her family and perpetuated in her community, in order to heal ancestral trauma and reclaim love of her body, mind and spirit.

Taína Asili will perform a 1-hour live performance, accompanied by guitarist Gaetano Vaccaro, followed by a 30-minute Q&A session with the audience.

This event is made possible by the Performing Arts Special Activities Fund.