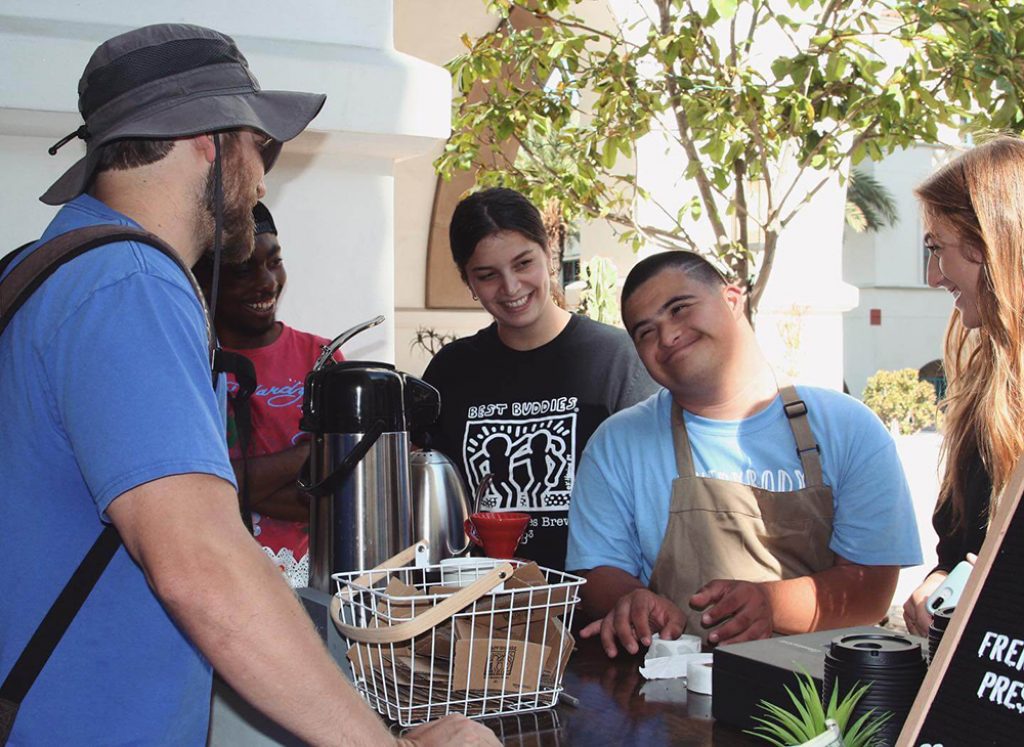 Jacklyn Googins (’19) first got the idea for B3 Coffee the summer before her senior year as an undergraduate at UNC. At the time, she was a part of UNC Best Buddies, a Campus Y committee dedicated to creating one-to-one friendships with UNC students and community members with Intellectual and Developmental Disabilities (IDD). As Googins learned about how people with IDD are marginalized and excluded from different parts of social life, she realized that coffee could be the way to bridge a connection between people with disabilities and the community.

“Working as a barista for three years, I noticed how coffee brings people together,” Googins said. “When people have the opportunity to connect over a cup of coffee, it can foster a remarkable transformation in the way differences are perceived.”

B3 is a pop-up coffee stand that acts as a platform for community members with disabilities to learn marketable skills, form friendships, and engage with the greater Carolina community. Formerly Best Buddies Brews, B3 Coffee now stands for the company’s three values:

At the pop-ups, the coffee coaches help as needed, but the baristas are the ones who manage everything from setting up to making coffee to overseeing the customer experience.

“There’s a lot of opportunity for growth,” Googins said. Once baristas demonstrate a mastery of french press, drip-coffee, and pour-over, they can advance to leadership positions like barista trainer, which helps teach newer baristas the three different types of brewing methods.

B3 also forwards its mission by partnering with Haerfest Coffee, a company intentionally created to provide jobs for those with disabilities. Haerfest employs people with disabilities to manage every step of the coffee making process – from designing artwork on the bags to roasting, grinding, packaging, and delivering the beans.

Working is something that most people take for granted, but according to Best Buddies’ website, an estimated 81% of adults with developmental disabilities don’t have a paid job in the community. By mastering marketable skills like cash handling, measuring, pouring, and customer service, individuals with IDD are not only increasing employment opportunities, but also increasing their visibility.

Video by Aaron Moger for unc.edu.

“At the beginning, we had to do a lot of asking and reaching out, but recently people have been coming to us,” said Hannah Stern, the project manager of B3 at UNC Chapel Hill.

So far, B3 has hosted pop ups everywhere from local elementary schools to coworking spaces in Durham. But B3’s reach has traveled a lot farther than the Triangle area.

A couple of months after launching B3 in Chapel Hill, Googins received a Facebook message from a member of San Diego State University’s Best Buddies Chapter. They were interested in starting their own B3 chapter in California.

“I had always intended for B3’s model to be replicable,” Googins said. “I designed start-up guides that included all of our materials and equipment and established a partnership with our coffee roasting company Haerfest.” This preparation allowed San Diego State University to launch its own B3 chapter almost instantaneously in March 2019.

Back in Chapel Hill, the word about B3 continued to spread. The chapter’s fall calendar was filled months ahead of schedule. This spring they’re continuing to lead biweekly meetings to train more volunteer baristas and coffee coaches.

“Ultimately, we want to foster a more inclusive and equitable world through these opportunities,” Googins said about B3’s reach expanding across the country. “We want to really connect and engage in a meaningful way though coffee, friendship, community, and creating a space where everyone belongs is our number one goal. Because belonging is a very powerful thing.”