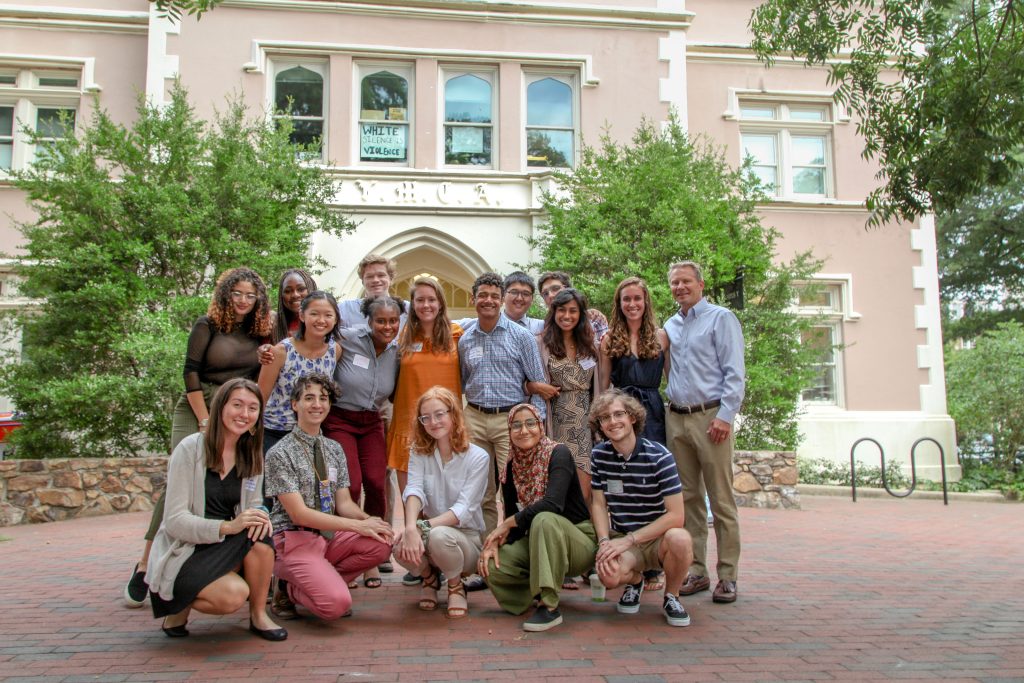 On Saturday, July 20, the Campus Y’s newest cohort of Global Gap Year Fellows concluded their two-week Global Gap Year Institute with a presentation and celebration for family, friends, and the campus community. Chancellor Kevin Guskiewicz opened the ceremony by congratulating the fellows and emphasizing UNC’s commitment to producing local and global stewards. The 2019-2020 class of fellows includes thirteen incoming first-year students and two rising juniors, who will defer a year of university enrollment to gain informal, global education that combines volunteer service, work, and international travel.

This is the first year that GGYF is partnering with Global Citizen Year (GCY) in order to expand the number of fellowships it can offer. This partnership, made possible through the support of an anonymous donor, will help the University keep up with the growing demands of students who seek long-term, transformative gap year experiences abroad. The University expects to triple the number of students in its Global Gap Year Fellowship (GGYF) program by 2020, growing the cohort from seven to 21 fellows per year.

Fellows choose one of two types of gap year experiences: a self-designed path whereby Fellows choose the country and public service organizations where they will volunteer, or the Global Citizen Year path, an 8-month leadership development program in a community in Brazil, Ecuador, India, or Senegal. Offering these two options will help fellows and their families access the model that best supports their learning goals and preferences.

“UNC-Chapel Hill is setting a new standard for how higher education institutions can encourage and fund meaningful gap years for their incoming students,” said Abby Falik, Founder and CEO of Global Citizen Year. “We are honored to be a core partner in offering a transformative global immersion and leadership development experience to incoming UNC students, especially knowing that these students will receive ongoing support and mentorship through the incredible Campus Y community when they arrive on campus.”

Since its inception, GGYF has supported 53 first-year students as they designed high-impact gap years around public service and social justice abroad. Richard Harrill, director of UNC’s Campus Y and the designer of the Global Gap Year Fellowship, hopes the program’s expansion will attract even more globally-minded, service-focused scholars to UNC.

“We believe service-based gap years align well with our values as a public university,” he said. “They prepare a rising generation of young leaders with the professional skills and intercultural competencies our North Carolina economy demands.”

Over 70 students applied for the competitive fellowship, which provides up to $8,000 for each recipient to use toward travel, living expenses and other trip costs. During this summer’s Global Gap Year Institute, Sarah Smith, GGYF’s program director, guided the cohort through team building activities, workshops, and travel planning sessions.

“Getting to spend two weeks with the fellows offers us the opportunity to establish trust and discuss everything from the basics of ethical service abroad to mindfulness and wellness. We are so excited to watch this promising group of students grow over the next year, and to welcome them back to UNC next fall with a renewed understanding of service, themselves, and the world.”

The 2019-2020 fellows’ interests range from youth development to environmental conservation, immigration reform to music. Recipients are listed below, alphabetically by North Carolina county and then by state. 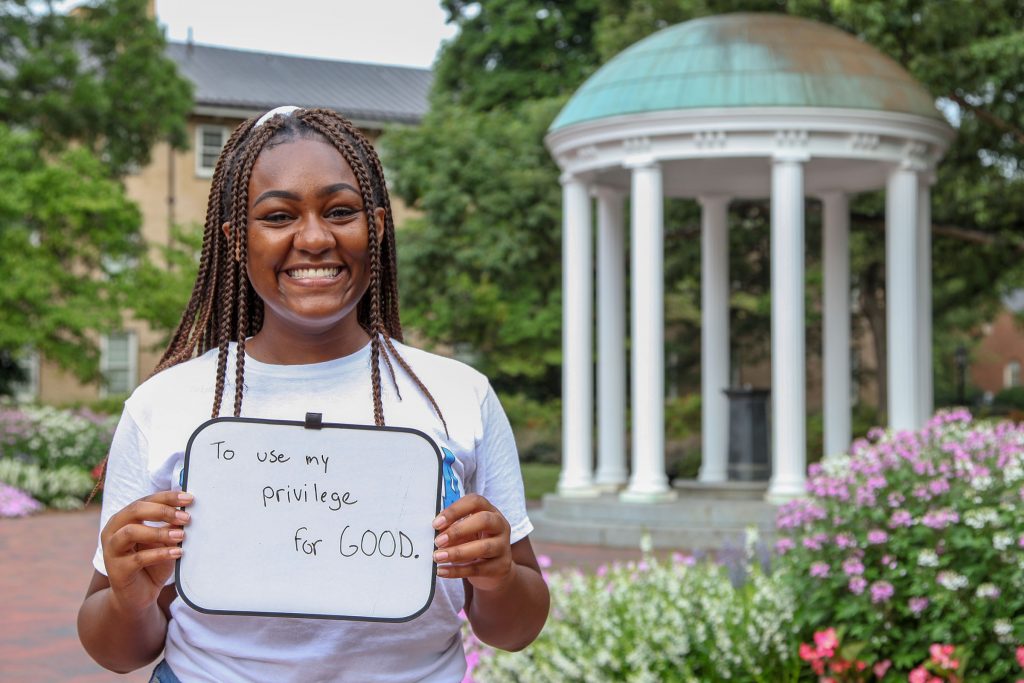 Simone McFarlane of Concord graduated from Concord High School, where she was active in the Spanish National Honor Society, Amnesty International, the Concord Art Club, and Service Club. Simone has been named a Carolina Scholar at UNC and has been admitted to Honors Carolina and the EXCELerated Research program. She plans to major in Global Studies and Public Policy. 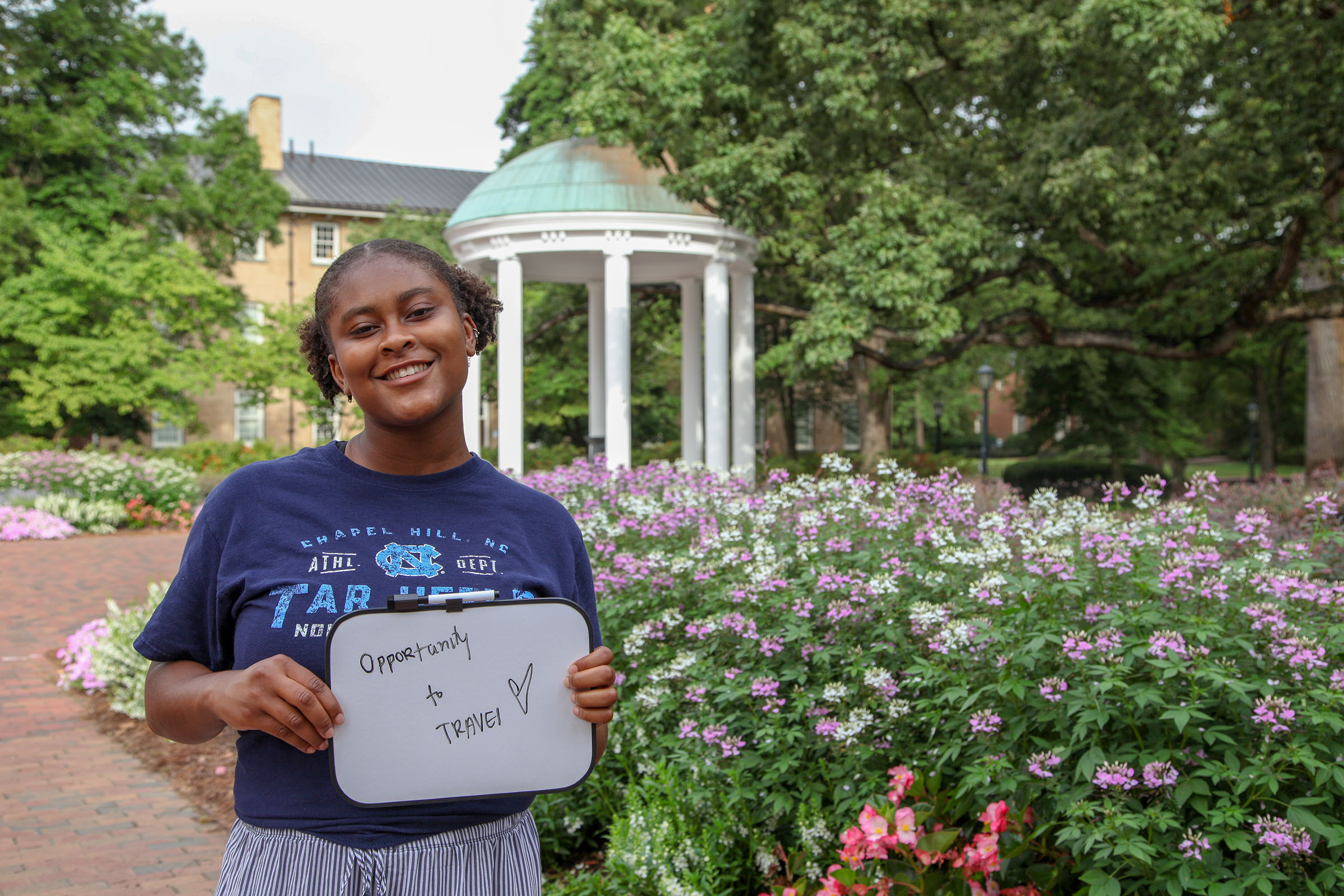 During her gap year, Nya will explore her interests in environmental sustainability, policy, and Spanish by serving Central and South America. Nya plans to volunteer with Iracambi, working on reforestation, water sampling, and crop maintenance efforts. She also hopes to take part in marine conservation and farm work through WOOFing in Costa Rica. 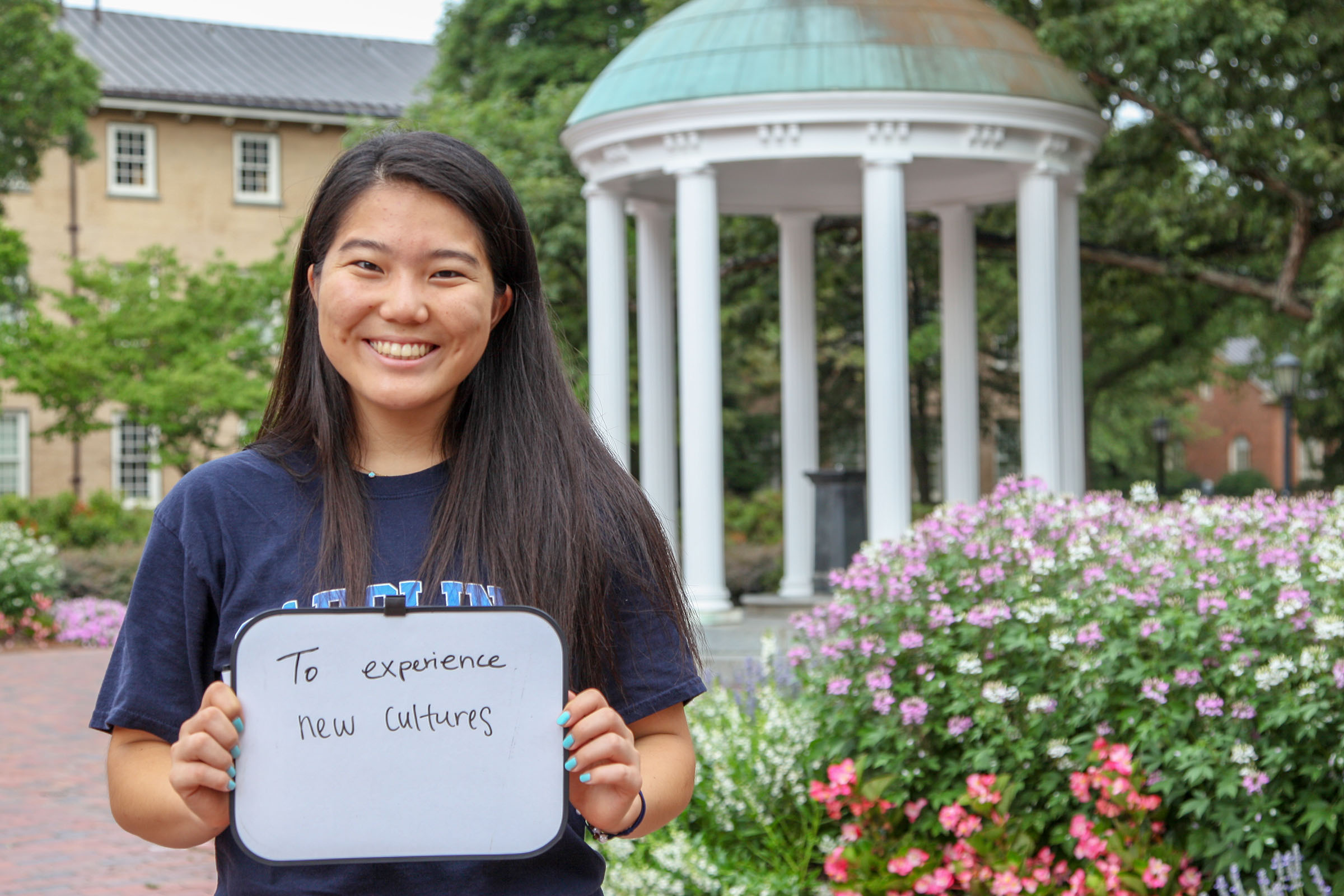 Angela Seo of Greensboro graduated from Northwest Guilford High School, where she was involved in Key Club and a member of the lacrosse and field hockey teams. She received the Mcknight Scholar Award, Aos Choice Award, and Northwest Field Hockey Most Valuable Player Award. Angela will be a part of the Honors Carolina program at UNC.

During her gap year, Angela will volunteer with Global Citizen Year in Ecuador. 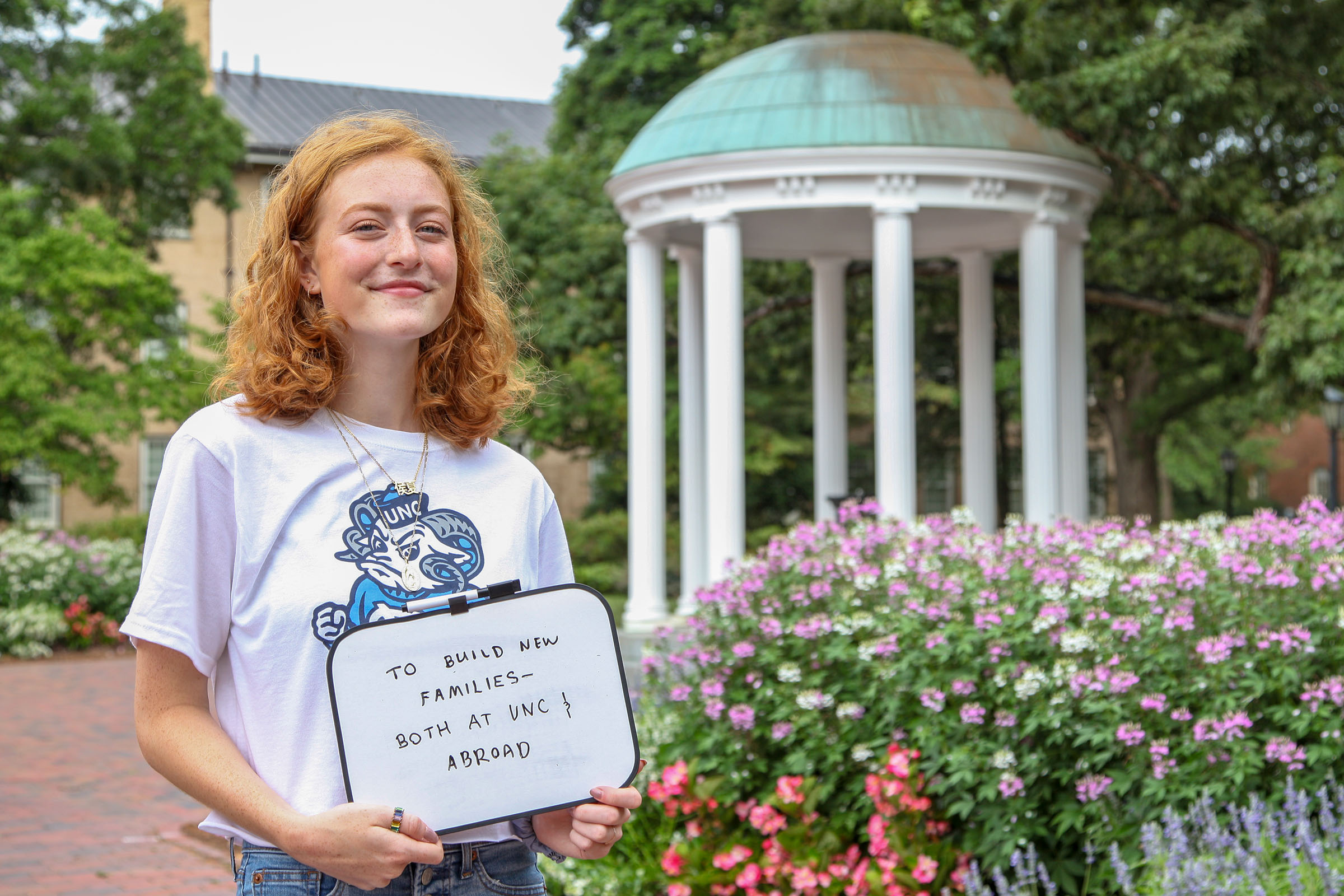 Sadie Jane Allen of Saluda graduated from Polk County High School, where she was a member of the Saluda Teen Advisory Group and Marketing Committee. Sadie received the Margaret L. Forbes Distinguished Scholar Award, the Saluda Women Award, the Aos Club Scholarship and the Newton Academy Forster/Stevens Award. At UNC Sadie will be a Tar Heel Merit Scholar and has been admitted into Honors Carolina. She plans to study Global Studies and Public Relations.

During her gap year, Sadie aims to improve her Chinese and further develop her interests in education and creative technology by interning at Beijing’s Language and Culture University. She is also interested in taking on a digital communications internship in Split, Croatia with International Volunteer HQ after some personal travel throughout Japan, Mongolia, and/or Morocco. Jennifer Kang of Charlotte graduated from Providence High School, where she was an active Model United Nations participant, member of Student Government, and library technology tutor and received the Junior Marshall Award. At UNC, Jennifer plans to study Computer Science.

During her gap year, Jennifer will volunteer with Global Citizen Year in Ecuador. 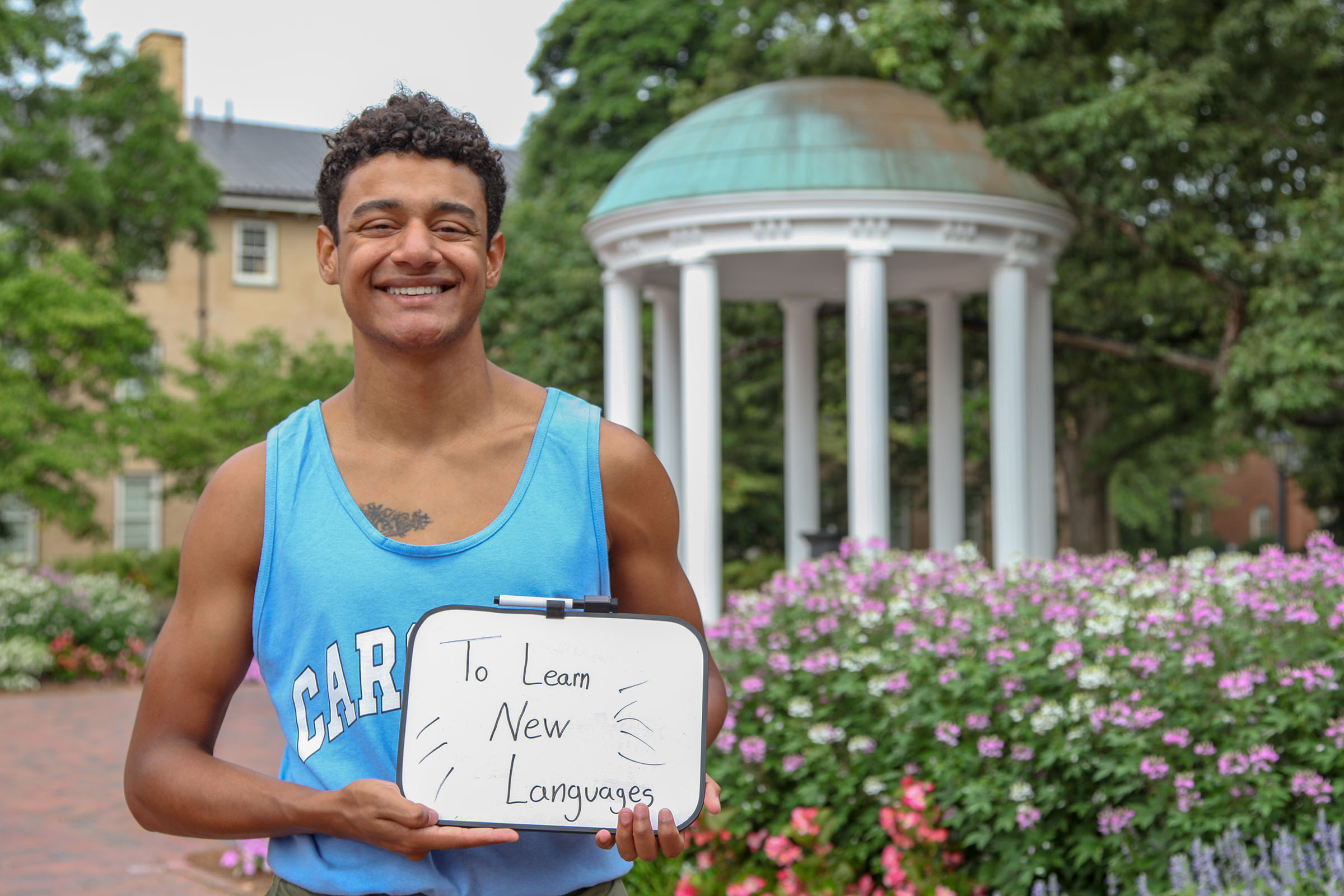 Francis Gabriel Guillen Diaz of West End graduated from North Moore High School, where he participated in the Future Business Leaders of America (FBLA) and was a member of his school’s marching band, cross country, track, and swim teams. Francis has received the James and Ellen Ross Carolina Scholarship at UNC and plans to study Global Studies and Economics.

During his gap year, Francis hopes to expand his world view and improve his language skills by volunteering at Project Favela in Brazil and a Czech Republic nonprofit called Prague Thrift Store. Francis also wants to visit Paris, Naples, and Zurich. 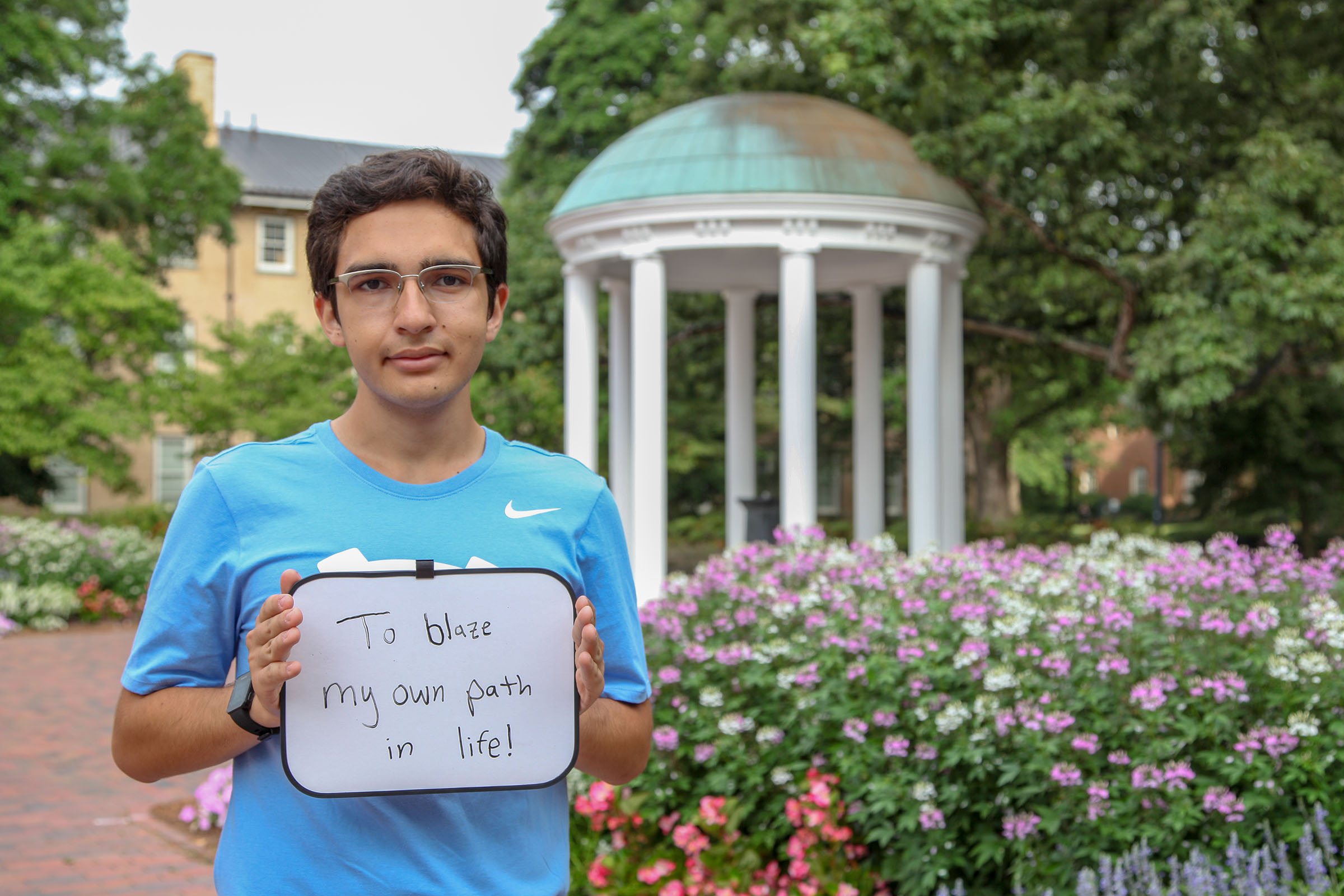 David Alejandro Gonzalez Chavez of Chapel Hill graduated from Carrboro High School, where he was the President of the Math Club and volunteered regularly. David received UNC’s Pogue Scholarship and early admission assurance into Kenan-Flagler Business School and was accepted into Honors Carolina. David plans to major in Business and Anthropology.

During his gap year, David plans to explore his academic interests, expand his global perspective, and try new things. He hopes to volunteer with Quaker Service in Northern Ireland, as well as travel personally through the Balkan Peninsula and Europe. 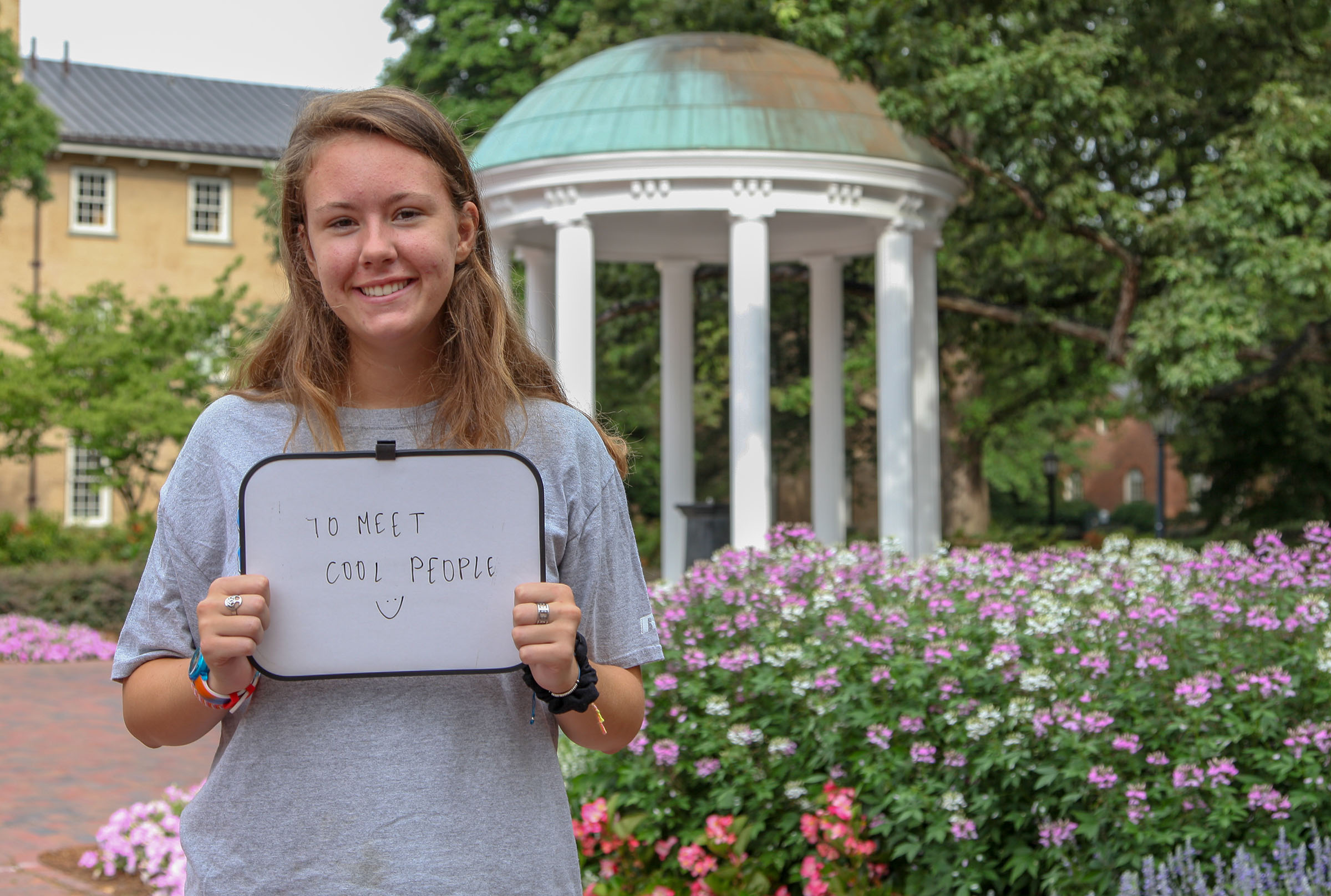 Ella Shapard of Chapel Hill graduated from Carrboro High School, where she was a member of the National Honors Society and spent time volunteering with Kidznotes in Durham. At UNC, Ella plans on studying Biology with a minor in Spanish and Marine Biology.

During her gap year, Ella hopes to practice her Spanish, form new communities, and have a better understanding of what she wants to study when she returns to UNC. Ella plans to volunteer with BarrioHabana in Havana, Cuba and the New Zealand Whale and Dolphin Trust. 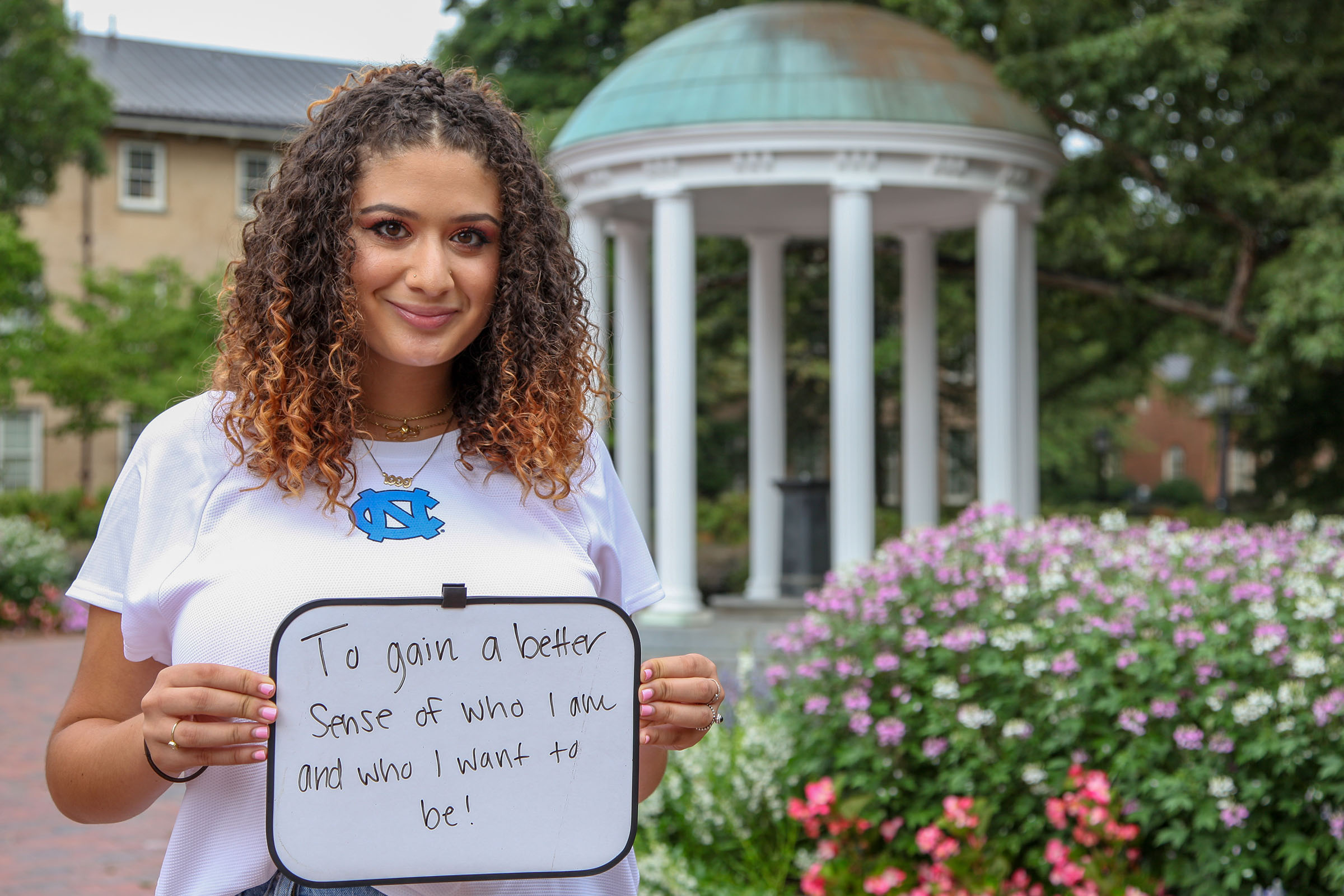 Farah Heikal of Raleigh just completed her sophomore year at UNC where she is pursuing a degree in Peace, War, and Defense and Political Science. In 2017 she graduated from Wakefield High School where she was a Junior Marshal and a member of the National Honor Society. At UNC, Farah is a Carolina Covenant Scholar and active in the Black Student Union and the Muslim Students Association.

During her bridge year, Farrah hopes to volunteer with the Lebanese Association for Development and Communication in Beirut, Lebanon; the Petra Mountains Academy in Amman, Jordan; and Seeds of Humanity in Athens, Greece. 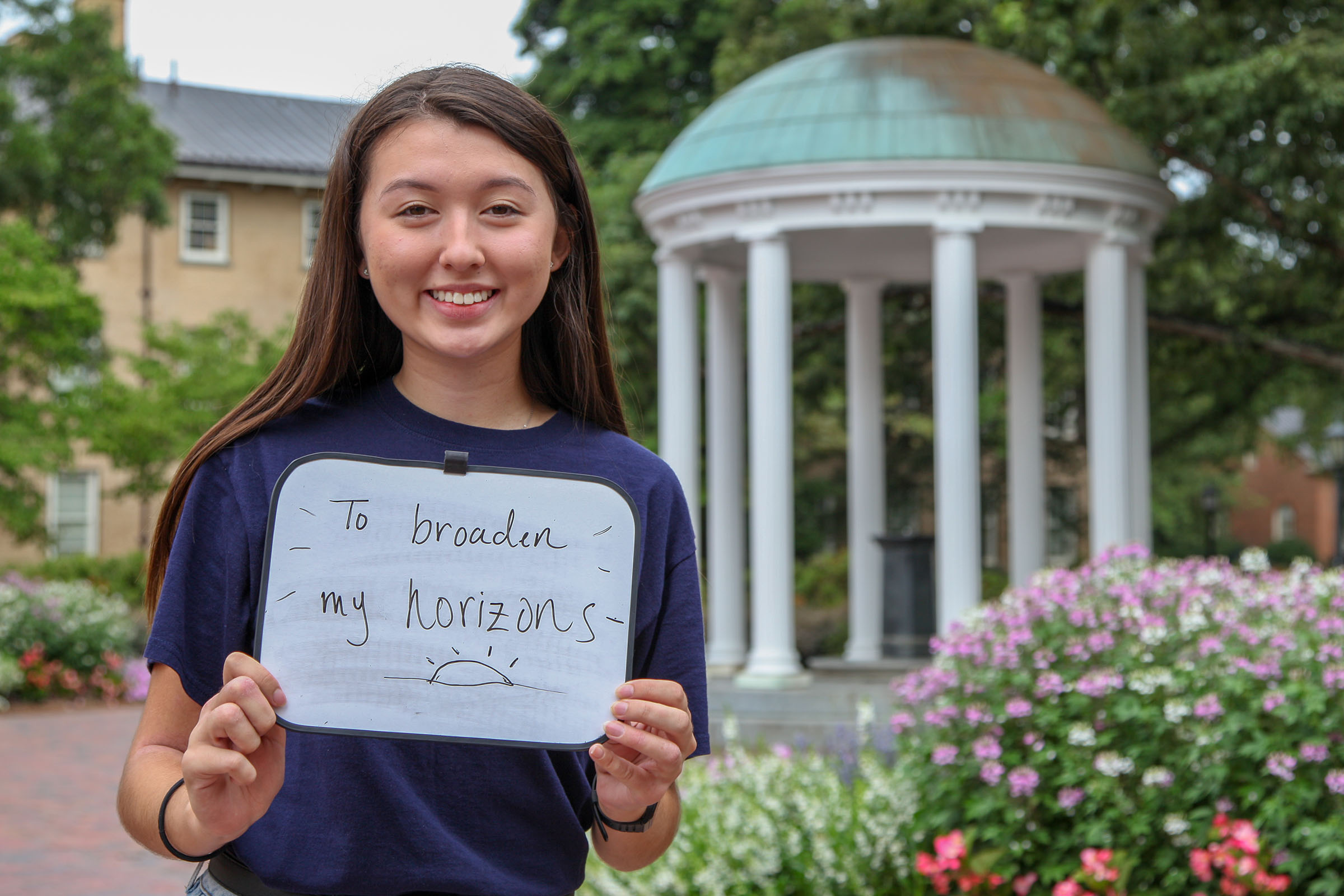 Sarah Duncan of Raleigh graduated from Smithfield-Selma High School, where she was Vice Chair of the National Honors Society and the Raleigh Youth Council. She served as the Captain of both the JV/Varsity track team and the Varsity cross country team. Sarah plans to study at UNC’s School of Media and Journalism.

During her gap year, Sarah wants to raise awareness of North Korean rights, build her language skills, and offer support to women’s empowerment efforts. She plans to volunteer with Justice for North Korea and Amigos in Uruguay before traveling through Europe with some fellow gappers. 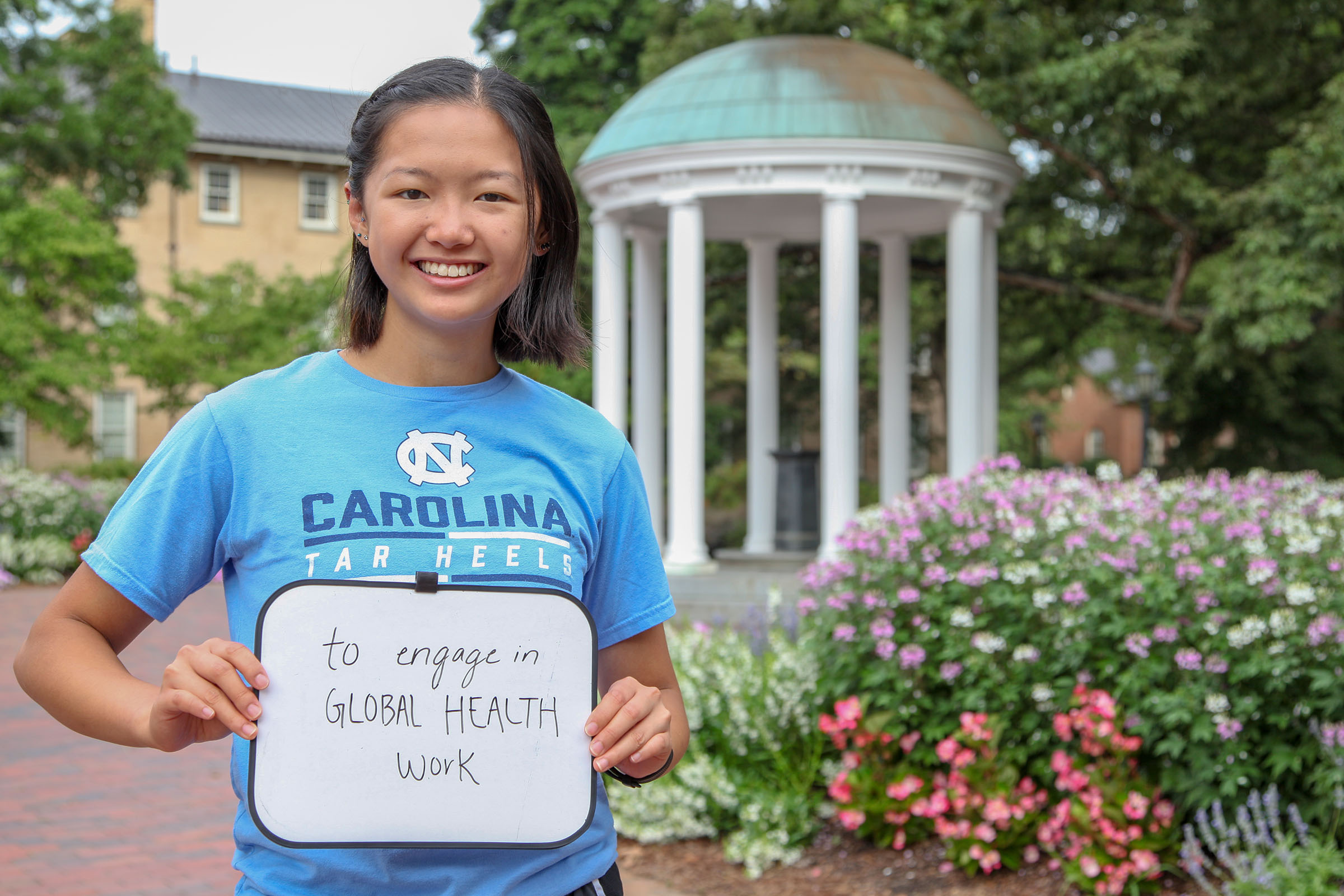 Karen Xu of Cary just completed her sophomore year at UNC, where she is pursuing a dual degree in Health Policy & Management and Global Studies. Karen is a 2017 graduate of Raleigh Charter School, where she was a National Merit Scholarship Finalist and a member of the Spanish Honor Society. At UNC, Karen is active in the UNC Wordsmiths, UNC Cypher and the Women’s Ultimate Frisbee team.

During her bridge year, Karen plans to further her interest in health policy by working on the Zero TB Initiative at Socios en Salud in Lima, Peru. She also hopes to assist with environmental education and water research at the Chengdu Urban Rivers Association in Chengdu, China. 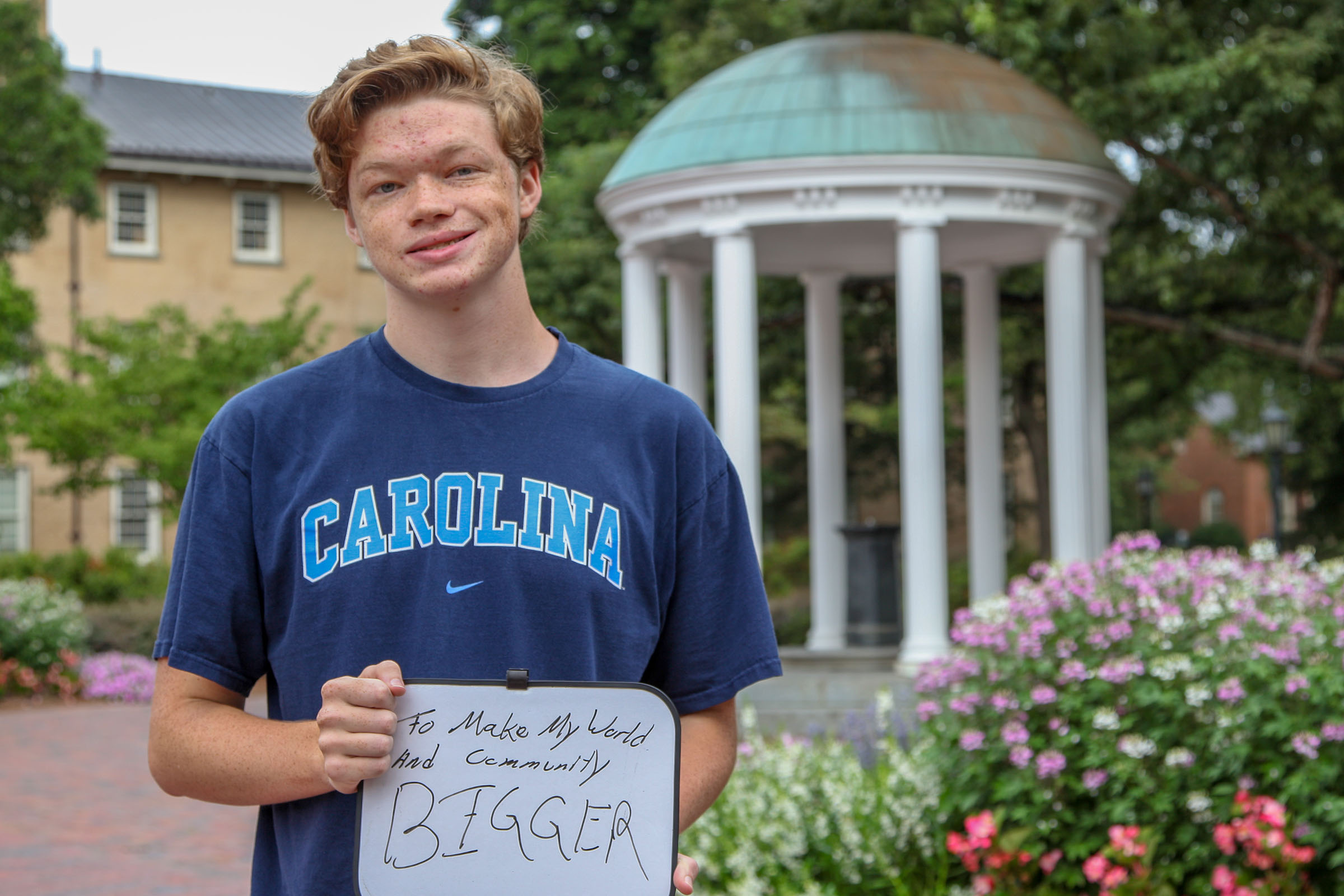 Grayson Buchanan of Wilson graduated from Greenfield School, where he was a member of The National Honor Society, Student Government, the swim team, and cross country team. Grayson received multiple awards for his scholastic and artistic talents, including The Michelangelo Award, The Abstract Painting Award, The Citizenship Award, The Most Valuable Volunteer Award, and The Academic Excellence Award.

During his gap year, Grayson plans to receive his TEFL certification and teach in Vietnam with Coins for Change and Morocco with Dar Si Hmad. 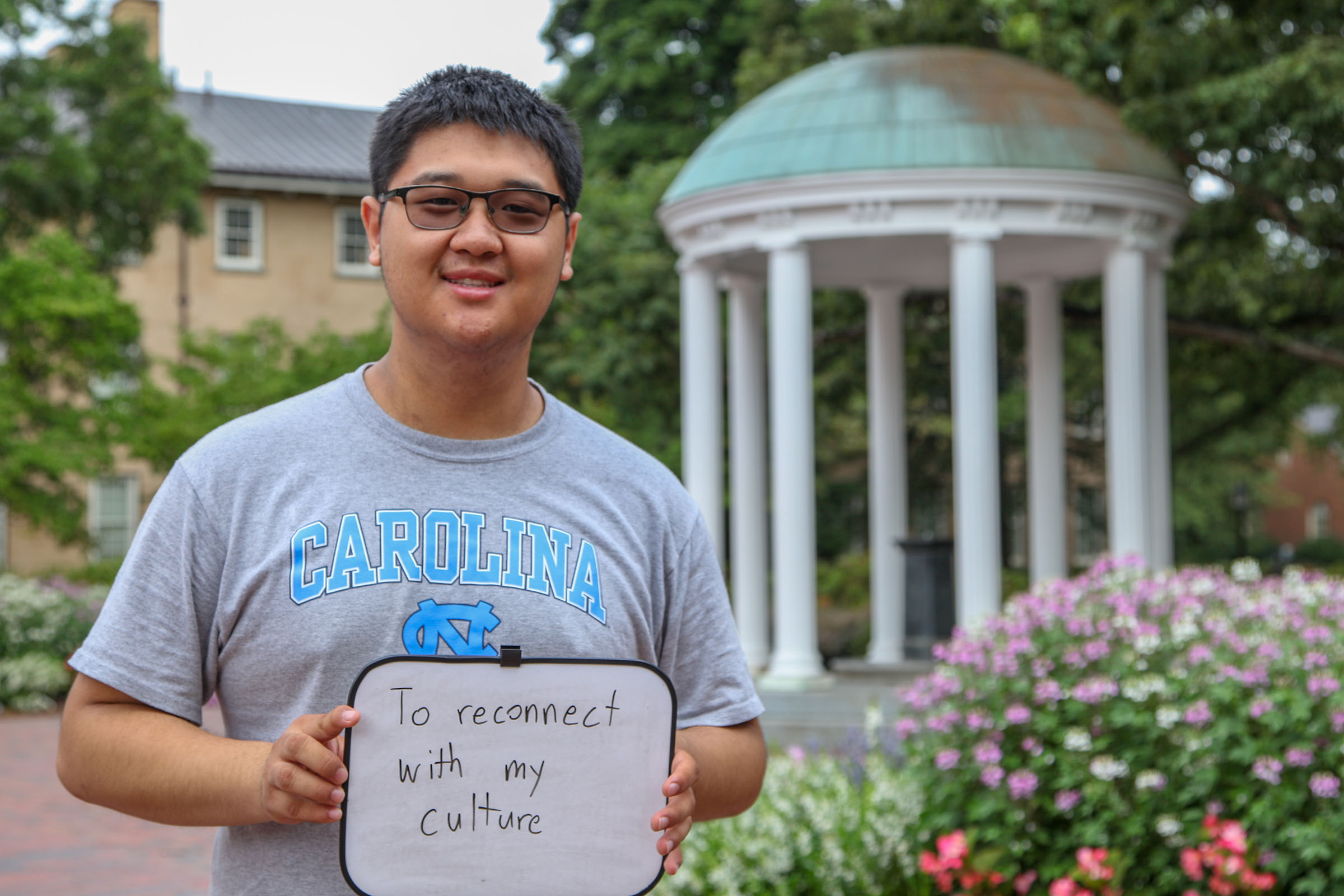 Matthew Lu of Edmonton, Alberta, graduated from Old Scona Academic High School, where he was captain of his high school’s Reach for the Top (an academic quiz competition) team, and was a member of the badminton and track teams. He received the Duke of Edinburgh Gold Award and First Class Honors. At UNC, Matthew will be a Carolina Scholar and plans to study Biology.

During his gap year, Matthew hopes to become fluent in Mandarin, reconnect with his culture, and investigate future career paths. He hopes to volunteer in China and Cape Town, South Africa. 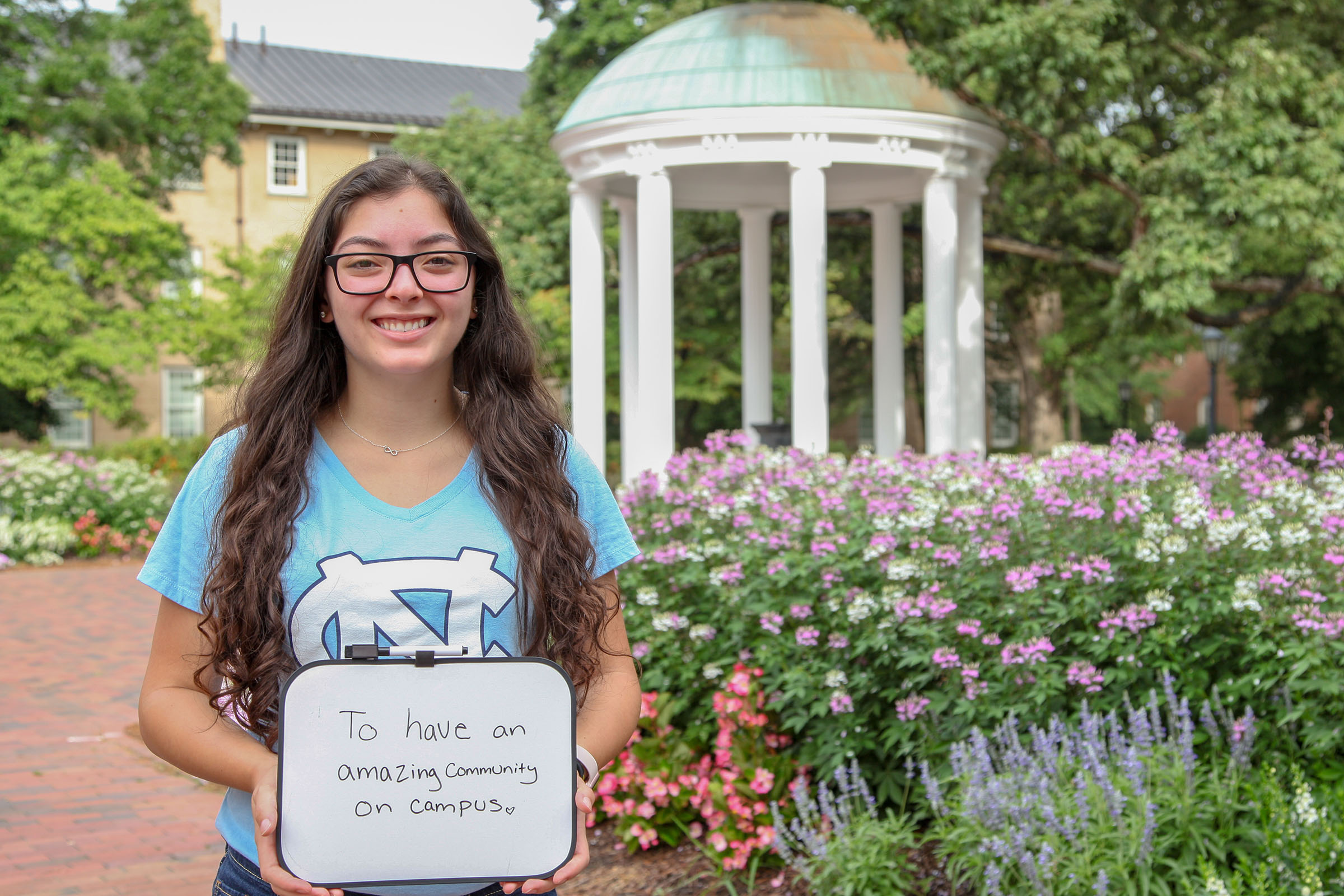 Taylor Molina of Edgewater, New Jersey graduated from Leonia High School, where she was president of the National Honors Society, was a Student Representative on the Leonia Board of Education, and was a member of the Rho Kappa Social Studies Honor Society. Taylor received the Becky Kleinman Award athletic award character. Taylor received the Morehead-Cain Scholarship to attend UNC and has been admitted to UNC’s Kenan-Flagler Business School and will be a participant in Honors Carolina. Taylor plans to volunteer in Ecuador with Global Citizen Year on her gap year.

During her gap year, Taylor will volunteer with Global Citizen Year in Ecuador. 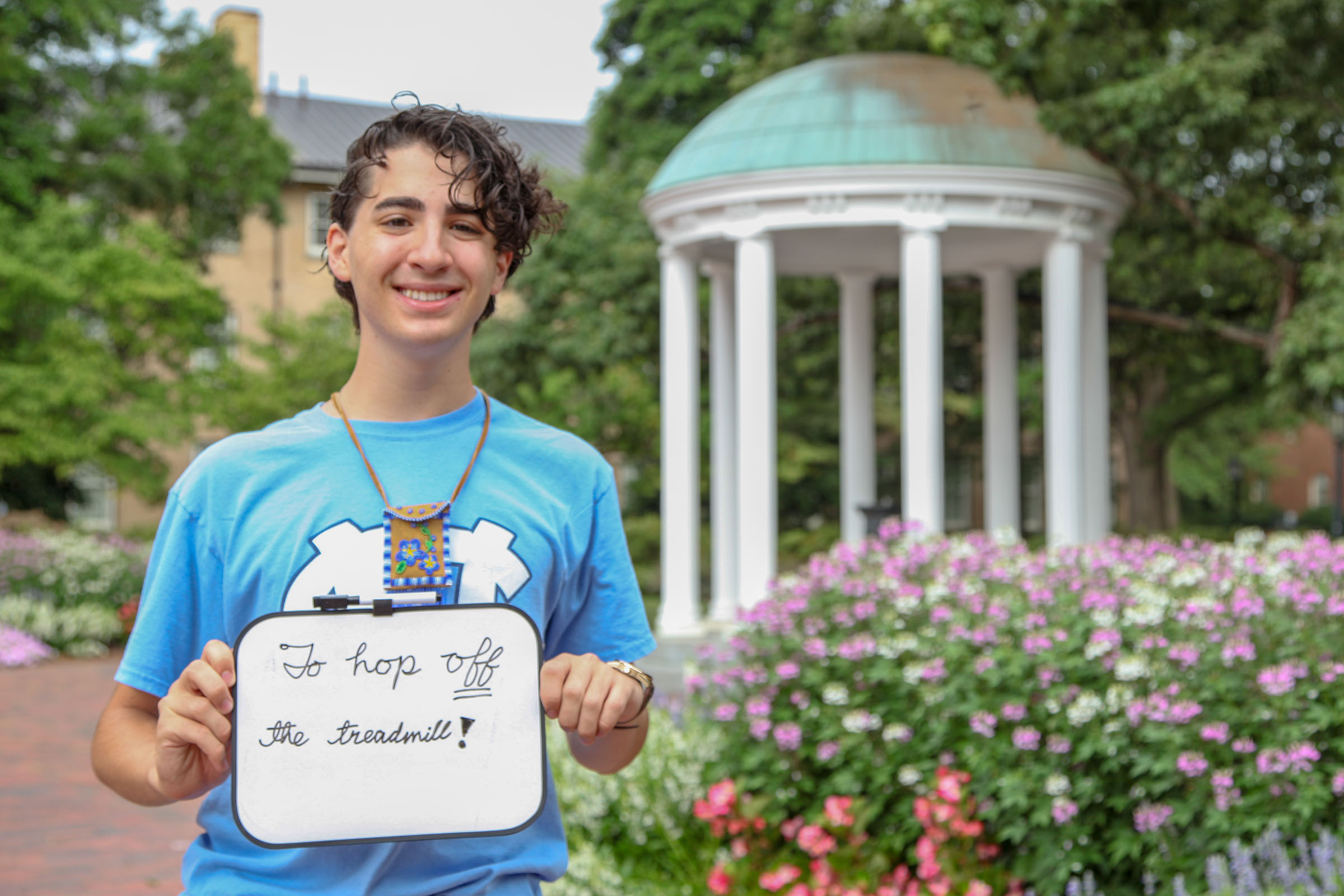 Jacob Gerardi of Fayetteville, New York graduated from Fayetteville-Manlius High School, where he was actively involved in Model United Nations, served as the Communications Manager for SciExcite Inc., actively participated in the productions of Phantom of the Opera, Newsies, Cinderella and Titanic and played violin in the orchestra. Jacob was also an Eagle Scout and a valued member of the Neighbors of the Onondaga Nation Club. Jacob plans to major in Global Studies and Political Science and American Indian Studies. He also received guaranteed admission into the EURO-TAM five-year Masters Program at UNC.

During his gap year, Jacob plans to volunteer with BarrioHabana in Havana, Cuba before he comes a Student Fellow with the Navajo Water Project in Crownpoint, New Mexico. He will also be explore his roots through visits to Israel and Cape Breton Island, Nova Scotia.